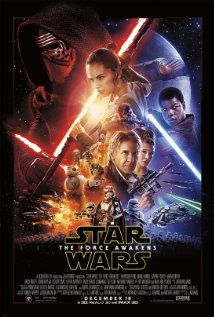 I promise I won’t give away any plot points, I won’t even give away the names of the new characters, so no spoiler alert. I’ll just sum up the basic premise form the opening credit roll as short as possible. The new baddies are now part of the FIRST ORDER and everybody is looking for Luke Skywalker who has disappeared.

The film starts about 30 years later where the Return of the Jedi episode left off with introducing all the new characters and the new storyline and sporadically gives nods to the original trilogy. Certain images and situations will certainly have a familiar feel. For instance you’ll notice some familiar looking debris in the desert. It will be no surprise that the main characters of the original trilogy, Han Solo, Chewbacca, Princess (or now General) Leia, C3PO and R2D2 pop-up.

The Force Awakens goes back to the magic of the original trilogy and director J.J. Abrams does so very successfully. The main negative point is that the nods to the previous films start of subtle but they turn into big winks and the entire plot line becomes somewhat of a rehash of episodes IV to VI, mainly of episode IV A New Hope. But don’t be alarmed as you’ll have a great time watching episode VII as it’s as good as you can expect and it gives you everything you were hoping for and then some. And to be honest all the nods and winks are what make the film so enjoyable.

Visually the film cleary continuous using the Nazi iconography for the bad guys as it was introduced in the original film with the Darth Vader helmet and the lining up of the star troopers and now also adds the typical Nazi red, white and black colorscheme to the mix, most noticeably in the scene where the general -played by Domhall Gleeson- addresses the star troopers before initiating an intergalatic holocaust.

Fans of The Raid 1 & 2 will definitely appreciate the (all too brief) appearence of its stars Iko Uwais & Yayan Ruhian. Max von Sydow, the iconic Ingmar Bergman actor, also shows up briefly.

With actors such as Oscar Isaac, Daisy Ridley, Adam Driver providing new blood and a bunch of the original cast and with directors Rian Johnson (Brick, 2005, Looper, 2012) and Colin Trevorrow (Safety not Gauranteed, 2012 and Jurassic World, 2015) in the wings to direct episodes VIII and IX Star Wars fans can sleep on both ears as the series are in good hands.
The new Disney produced Star Wars series is off to an great and entertaining start of the highest, or perhaps better, FIRST ORDER.