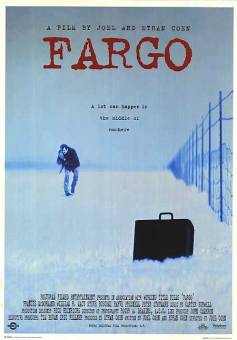 Jerry Lundegaard is in need of money and has set in motion a plan to let ‘two professionals’ kidnap his wife. His rich father in law will have to come up with the ransom money which Jerry can ‘divvy up’ with the kidnappers. At least, that’s the plan. Blood will be shed.
A pregnant police woman (a delightful Frances McDormand in an Oscarwinning role) will get on the snowy and bloody trail of the criminals at her own leisurely pace being as much occupied with finding food and hotel rooms at reasonable prices as with catching the bad guys.

Movie buffs will notice plenty of references to other movies such as to Edgar G. Ulmer’s Detour (the telephone cable being pulled underneath a door opening), Psycho (the ripping of the shower curtain), The Shining (the force opening of the bathroom door + the opening of the bathroom window), and to their very own film Blood Simple (the deserted highway at night with a character holding a dead body while suddenly in the distance a vehicle approaches) and so on.

I could go on forever discussing the different aspects of this film. The black humour, the great writing, the wonderful characters (e.g. the scene with former classmate Mike Yanagita), the acting, Roger Deakins’ photography trying to keep the snow landscapes interesting and at times deliberately creating confusioning shots that initially make it hard to determine if you’re looking up or down. The use of the Midwestern accent (good luck if you’re trying to count all the yah’s) and its distinct way of expressing accompanied with a particular sense of niceness.

I’ll just point out a couple of small details that exemplify The Coen brothers peculiar sense of humour which makes every repeat viewing of their films so worthwhile.
1) Every time somebody is about to die in the film you can hear some kind of a ringing or bell sound. E.g. the sound of a car door or trunk which is ajar just before someone gets shot or of the tiny bells on the edge of a woolen hat of a character just about to axe someone. For Whom the Bell Tolls?
2) The Coen brothers asked the props department to put little statuettes of pigs all over the house of the Lundegaard family. Why? To see if the critics would spot them and see if they would come up with some interesting theories as to why they did it. Have fun spotting the pig statuettes in the below clip.