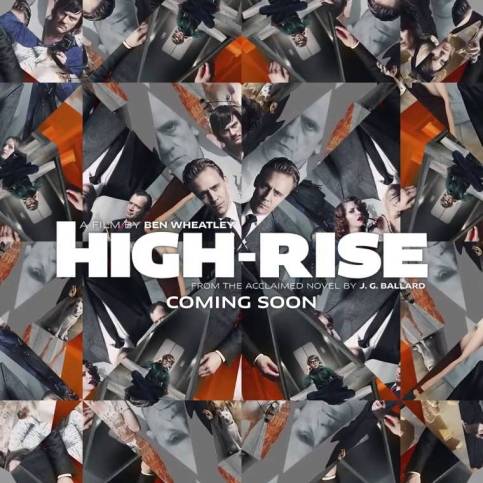 Ben Wheatley is one of the (not just) British directors to keep an eye on. Up to High-Rise (2015) he had completed 4 feature films on micro to low budgets and on each occasion had performed miracles with the limited means at his disposal.
His debut Down Terrace (2009) was a kitchen sink gangsterdrama that was literally made in and around the childhood home of co-writer and star Robin Hill in 8 days. His 2nd film Kill List (2011) starts of as a thriller about some hit men and somewhere midway shifts into an occult horror film, as if Nicolas Roeg’s Performance (1970) fell under the spell of Robin Hardy’s The Wicker Man (1973).
Next up was Sightseers (2012), a sort of comical horror version of Mike Leigh’s Nuts in May (1976) written by the co-leads Alice Lowe and Steve Oram which was selected for the ‘Quizaine des Réalisateurs’ in Cannes. They play a couple that go on a caravan road trip leaving a bloody trail along their way. Not unlike High-Rise class differences are at the center of the film. Wheatley has since executive-produced Oram’s feature debut Aaaaaaaah! (2015) -via his production company Rook Films- a film with an even more primitive dissection of what happens when that thin coat of varnish called civilisation is scratched away.
A year later Wheatley made A Field in England (2013), shot on a micro budget in only 12 days. Set in the 17th century during the English Civil War, 3 deserters meet each other and some hallucinogenic mushrooms in (well yes) a field in England. As if Peter Watkin’s
Culloden (1964) and Ken Russel’s Altered States (1980) were put in a blender and the result felt like one of the best cinematic cocktails you ever have the pleasure to put down the hatch.

This film gave Wheatley some cloud to attempt a (financially) more ambitious film project, an adaptation of J.G. Ballard’s (author of Crash, Empire of the Sun which were brought to the big screen by respectively David Cronenberg and Steven Spielberg) 1975 dystopian novel High-Rise.
Dr. Robert Laing (played by rising star Tom Hiddleston in perhaps his best performance to date) has recently moved into a new luxury apartment which is part of 5 High-Rises of which only the first one has has been completed, the remaining four are still under construction. The architect Royal (Jeremy Irons) has come up with a rather unique concept. The five tower blocks are shaped like the five fingers of an open hand, the lake is to become its palm. The upperclass occupy the top floors of the buildings, the lower income families live in the lower ones. Your wealth determines your level (or floor). The occupants have access to a swimming pool, a gym, a supermarket and even a primary school. Besides going to work there is little reason for the residents to leave the building, gradually they become trapped like the bourgeoisie in a Buñuel film.

Initially the occupants are soothed by the fact that “the building is still settling” but when the infractures many failures become more apparent the tensions between the upper and lower floors start to erupt. The opening scenes -a short of flash forward of things to come- of the film however immediately clearly show that the architect’s social experiment is doomed to fail. The film is set in the index finger of the so-called open hand, the writer obviously wanted to point out a few things about (British) society. It woud have been less subtle to have the action take place in the middle finger although towards the end director Ben Wheatley inevitably presents one to Margaret Tatcher.

Besides Hiddleston and Irons you will recognise Sienna Miller as a single mother of a bastard son of one of the upper class men, who has a fling with Dr. Laing, Luke Evans as Richard Wilder, a frustrated lower class man whose married with Helen (played by Elisabeth Moss mostly known for her role as Peggy Olson in the popular HBO series Mad Men) who is about to give birth to yet another addition to their family and Stacy Martin (Lars von Triers’ Nymphomaniac) as a cashier in the supermarket.

All the dialogue in the film in one way or another is indicative of the class difference (“You’ve built all this?” “Dreamt, conceived, I hardly pulled up my sleeves”) and is often hilariously funny in a subtle -or often less subtle- very British sort of way (“You can’t put him over the edge, he still owes me a game of squash”).
Notable is the use of the famous ABBA song S.O.S. featuring during a fancy dress party (evoking Greenaway’s The Draughtman’s Contract & Kubrick’s Barry Lyndon?) being held in the penthouse -composer Clint Mansell (Requiem for a Dream) had it arranged for strings for the occasion- and later on in a brilliant cover version by Portishead.

Among the films many highlights there’s sequence of a man jumping of the building to his death landing on the bonnet (or hood if you perfer) of a car, a scene that would make Richard Donner -who specialises in these type of ‘drop shots’- jealous.
Visually the film peaks with a brilliantly stunning shot that shares us a point of view as seen through a kaleidoscope. I’ve prepared the below montage of potential reference points culminating in the said kaleidoscope shot.
The clip starts of with some shots from Martin Scorsese’s Kundun (1998) in which a young Dalai Lama is peaking through a big looking glass to his subordinates below. When Scorsese cuts to the POV the sequence has some typical Scorsese/Thelma Schoonmaker dissolving along the axis type of editing. There’s a similar shot from Scorsese’s The Age of Innocence (1993) where a character played by Richard E. Grant is looking through some theater binoculars down at the conductor of an orchestra over to a charater arriving in an opposite opera box. Here also Scorsese tries to visually convey the speed of the eye movement by skipping frames combined by dissolves along the axis.
There’s not really a direct connection with Wheatley’s kaleidoscope shot. So why include them any way? Well Scorsese was so impressed by A Field in England that he offered to produce Wheatley’s next film, and so he did. As High-Rise was already under way this would become the upcoming Free Fire.
Thematically you could say there is a bond between Kundun, The Age of Innocence and High-Rise as they are Scorsese’s most class conscious films. Kundun is a film about a society that at a certain stage gives its absolute power in the hands of a child and The Age of Innocence portays New York’s high society in the late 19th century and its strict social rules and customs which ruin the love affair between the two main characters. Scorsese even called this his most (emotionally) violent film.
The next 2 clips do have a direct link with High-Rise in my opinion. There’s a clip from Brian De Palma’s Carrie (1976) featuring the “they’re all gonna laugh at you” kaleidoscope shot from that film’s celebrated prom sequence. And finally a shot from John Boorman’s Zardoz ( 1973) showing a fractured mirror shot including Sean Connery. Wheatley has expressed his admiration for Boorman’s Zardoz on many occasions including the 16 minute plus appreciation to be found on Arrow Film’s UK Blu Ray release + in his video clip for the band Editors ‘Formaldehyde’ which has references to both Sergio Corbucci’s Django (1966) as well as Zardoz. Even the picture on Wheatley’s Twitter profile (@mr_wheatley) features the giant stone head from this film.

The kaleidoscope shot is perhaps also linked with one of the many hilarious lines from the film. At a certain stage when the servants are no longer preparing the meals for their masters one of the rich men is wondering who cooked the food they’re eating to which one of the characters replies it’s now op to their wifes: “the women are rotating”. There’s a chance the montage I’ve prepared can’t be played in the UK (as per a message I’ve received from Youtube) so just in case I’ve uploaded it via WordPressvideo as well.

I was lucky enough to see the film in march of this year at the Offscreen film festival in Brussels in attendance of Ben Wheatley where it had the honour of closing the festival and I’ve since see it again when it was released in Belgium in June. The film even played better the second time round. When you watch the film for the first time there’s a chance you may need some time to adjust to the films chaotic opening, it’s definitely a busy film but Wheatley and Jump have certainly found the right tone for putting J.G Ballard’s novel to the screen. It’s nice to see that despite the bigger budget he did not have his vision muddled with. Can’t wait to see Free Fire.