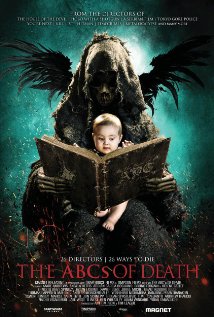 This horror anthology starts of with an opening card stating: The following feature film was created by 26 directors from around the world. Each director was given a letter of the alphabet and asked to choose a word. They then created a short tale of death that related to their chosen word. They had complete artistic freedom regarding the content of their segments.
Since the film, including opening and closing credits, has a duration of 129 minutes the directors off course only had a limited amount of time to tell their story. Another constriction appears to be that the beginning and ending of every segment had to be filled with something red.

An anthology or omnibus film is a feature film that consists of a series of short films usually directed by different directors with a common theme (Les Sept péchés capitaux, 1962 & 1992), location (New York Stories ,1989, Four Rooms, 1995, Paris je t’aime, 2006, Tokyo!, 2008) or story as a framing device (Dead of Night, 1945).  The very nature of this type of film is that the segments tend to vary in quality and the tone shifts do not make it easy for the viewer to experience the result as a single film.

Discussing all 26 short films would take forever + would ruin most films due to the fact that the premise in most cases makes up for 99% of the film. The film starts of great with Apocalypse that succesfully plays with the audience’s expectations. There’s an excellent animation Klutz (Anders Morgenthaler, known for Princess 2006) and a great clay animation Toilet. My other favourite segments were Dogfight, Orgasm (in the typical pure cinema style and soundtrack from the couple Cattet & Forzani) and -perhaps my favourite of the bunch, the most voilent and poignant one- XXL dealing with our obsession with the perfect body and the negative influence of commercials to this effect.
Theres were some great, rather extreme chapters from asian directors Libido and  Zetsumetsu (Extinction). The latter is an outrageous homage to the sexual innuendos in Stanley Kubrick’s Dr. Strangelove.

Below you can find the full list of titles and directors which includes some brilliant helmers such as Ben Wheatley (a.o. Sightseers, A Field in England) and Srđan Spasojević (known for the notorious Srpski film, a.k.a. A Serbian Film, 2010)