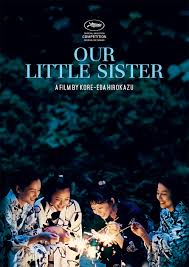 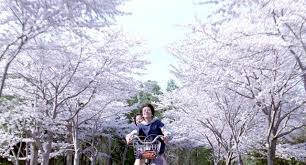 Believe it or not but Our Little Sister the new film by Kore-eda Hirokazu (Air Doll, After Life) is based on a manga series called Umimachi Diary (meaning Seaside Town Diary) by Yoshida Akimi. Be it the kind that tries to appeal to (younger) women, so it’s more like a soap opera version of a manga.

Three sisters in their twenties attend the funeral of their father who’s left them 15 years ago and whom they haven’t seen since. They’re being picked up at the train station by a young teenager named Suzu who turns out to be their half sister.
In  the spur of the moment, when they’re returning home and their train is just about to leave, they ask Suzu if she would like to come and live with them. With little hesitation she agrees to, her three new found half sisters are likely to be better companions to hang around with than her stepmother would be.

Suzu moves to the rural town where she joins here half sisters in the house of their grandparents who raised them after their mother died. Four orphans with the same biological father begin their life together and will have a lot of Late Springs, Early Summers and Late Afternoons with lots of Flavour Of Green Tea Over Rice and Ohayo’s (Good Morning) in the morning to use but a few of the international titles of Yasujiro Ozu films that many rightly feel Kore-eda is paying homage to.

What the movie lacks in plot (of which their is little) it more than makes up for with lovely family dinner scenes (with lots of mackerel) and delightful character moments. The bike ride through a tunnel of cherry blossoms trees will linger in your mind for quite some time. I had a great Autumn Afternoon at the cinema.