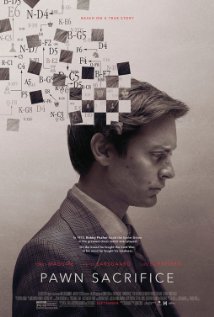 Tobey Maguire plays the notorious Bobby Fisher whose life revolved solely around chess. We do get to see a little of the young Bobby’s first steps into the world of chess but the movie centers on the World Chess Championship of 1972 held in Reykjavik, Iceland during the height of the Cold War when Russian players had been dominating the game for decades.
The legendary Russian chess Grandmaster and reigning world champion Boris Spassky is the only player Fisher had not been able to beat yet. Spassky is played by Liev Schreiber who reteams with director Edward Zwick after their collaboration on Defiance.

The excellent Michael Stuhlbarg (A Serious Man, Afterschool, Hugo and HBO’s Boardwalk Empire) plays a leading figure in the american world of chess who tries via the help of Father Bill Lombardy (Peter Sarsgaard) to rein in the genius and the apparent madness of Bobby Fischer to help defeat the Soviet Empire. The game captured the imagination of the world and was a highly publicised (Cold War propaganda) event. Amongst chess connoisseurs game 6 of the  ’72 world championship is still considered to be one of the greatest games of chess ever played.

If you’ve seen the 2011 Liz Garbus HBO documentary Bobby Fischer Against the World there will be few surprises. If you wish to find out more on the rise and fall (into madness) of Bobby Fisher this doc is a must see.
But the film is definitely a well written (Steven Knight writer of Dirty Pretty Things, Eastern Promises and the BBC series Peaky Blinders, and director of Locke), well photographed (Bradford Young, DoP of Ain’t Them Bodies Saints and A Most Violent Year) and well acted dramatisation of these historical events that keeps you on the edge of your seat even if you are not well acquainted with the game of chess.