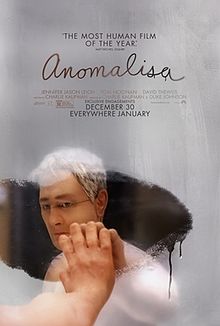 Based on his “sound play”, Anomalisa marks the long anticipated return in the director’s chair for Charlie Kaufman since his brilliant debut Synecdoche, New York (2008). He’s mostly known as the screenplay writer for Michel Gondry’s Eternal Sunshine of the Spotless Mind (2004) and to a lesser extent Human Nature (2001) and Spike Jonze’s Being John Malkovich (1999) and Adaptation (2002).

This stop-motion animation film he co-directed with Duke Johnson follows Michael Stone (voiced by David Thewlis), a succesful writer of a book on customer service, who’s on his way to a convention on this subject held in Cincinatti. After checking in the Fregoli hotel he decides to call a former girlfriend Bella Amarosi (what’s in a name) he unexpectedly left over ten years ago. They meet but the encounter does not turn out a succes.

In the meantime we’ve noticed every character in the film -regardless if they are a man a woman or a child- as seen by Michael has a remarkably similar face and voice (that of Tom Noonan). In his view everybody looks the same and has the same uninteresting things to say, he’s therefore only interested in being left in peace and tries to avoid social contact to the an absolute minimum.
The name of the hotel seems to suggest he may be suffering from of the so-called Fregoli delusion, or the delusion of doubles, which is a rare disorder in which a person holds a delusional belief that different people are in fact a single person. It’s named so after the turn of the century Italian quick-change stage actor Leopoldo Fregoli.
This seems to change suddenly when he encounters Lisa who does look different and does have a voice of her own (that of Jennifer Jason Leigh). They have sex (an incredibly sweet scene) and the illusion holds up at least till the morning after breakfast conversation.

The writing and plot is rich, layered and if you’re willing to dig deeper you’ll notice it’s dark and perverse as well. There’s a lot of irony linked to the customer service expertise knowledge of the main character. When he’s confronted with professional customer ‘speeches’ from e.g the taxi driver who drives him (who can’t stop giving free advice on Sin Sin or Cin Cin city Cincinatti) to the hotel and the phone conversation he has with the room service order taker who he feels is taken too much time and he’d like to cut of as soon as possible are probably applying his book on customer service to perfection. “You can feel the smile even if you don’t see it” Michael would state during his convention address).

A lot is being introduced extremely sublty and might not be picked up at all and may require multiple viewings. The ‘toy store’ confusion which is planted during the cab scene in the beginning and is built upon during the entire piece is being paid off during the conclusion of the film. This kind of complexity and indepth psyschological portrayal is not something you’d expect in a stop-motion animation film. It’s a truly original film that pulls no punches and doesn’t care about showing characters that have serious flaws or might lack sympathy, somewhat symbolised by the fact that the makers chose not to erase or digitally hide the inperfections in the dolls faces that are needed for facial movement. Needless to say: required viewing for mature audiences and undoubtedly one of the films of the year.

Een gedachte over “ANOMALISA: complex, one of a kind stop-motion animation with strings only puppet master Charlie Kaufman can pull.”