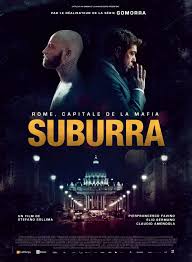 Suburra refers to a suburb of Acient Rome and was the title of the novel by Carlo Bonini and Giancarlo De Cataldo on which this film by Stefano Sollima is based. And in case you’re wondering, Stefano is indeed the son of Sergio Sollima (1921-2015), one of the three Sergio’s that were famous for their Spaghetti westerns, the others being Sergio Leone and Sergio Corbucci.

Set in november 2011, the ‘Southern Families’ of the maffia are planning on building the New Las Vegas on the shores of Ostia. An Old School maffioso called ‘Samurai’ (potentially a Jean-Pierre Melville fan) is the man that needs to ensure everybody  stays in line so nothing will prevent the multibillion future cash-cow project from happening.
The Vatican is involved and so is politician Fillipo Malgradi (an excellent Pierfranscesco Favino). When the corrupt Malgredi has a private crack-infused ‘bunga bunga’ with 2 prostitutes of which one is underaged the wheels of fate are set in motion. A countdown of 7 days that will lead to ‘the apocalypse’ has started.

Yet another Italian gangster film you might say and yet it’s a good one. It’s difficult to remain original in a genre that has had many a highlights in the past and in more recent years.
Suburra goes less the realistic docu style way of Gomorra (although there’s some of that as well) but more the architypical way of a Michael Mann. The doomed gangsters looking at a beach behind a big glass window and way the music of M83 is used repeatedly and extremely loud is very reminiscent of Mann. A scene that certainly stands out is the shootout that starts on a back exit stairway of a supermarket and continues in a shopping mall.
The plot is very well set-up and each character gets ample time to play out it’s well-measured role.

By the way Netflix has started production on a TV-series to be aired in 2017 if it’s anything like the film it’s certainly something to look forward to.