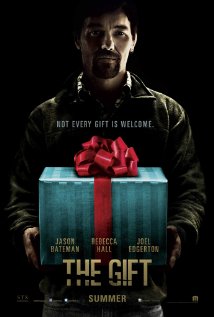 A childless succesful couple is moving to Chicago as the husband Simon (Jason Bateman in an atypical non comedic role) has landed a new interesting job. Simon -who grew up in Chicago- runs into a former highschool classmate Gordo (role for writer, producer and first time director Joel Edgerton) he had ‘forgotten’ all about. They promise each other they’ll get in touch to catch up but Simon doesn’t really give us the impression he intends to.
Gordo on the other hand definitely has plans to get back into Simon and Robyn’s (an excellent Rebecca Hall of Vicky Christina Barcelona fame) life and starts showing up uninvitedly with gifts.

It’s a plot driven film that desperately tries to be clever and as far as characterisations go it’s far above average and has at least one interesting role reversal but in the end cannot help but become predictable. If you however like these kind of ‘plot twist movies’ you probably won’t be disappointed.