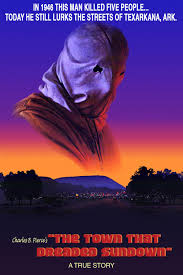 As I’ve stated yesterday the 1976 version of ‘The Town That Dreaded Sundown’ is based upon real events that took place in 1946 in Texarkana where the local town was traumatised by a spree of killings by a hooded serial killer, nicknamed The Phantom, who was never caught.

The film is an early example of the modern day slasher subgenre, made after Bob Clark’s 1974 ‘Black Christmas’ but prior to John Carpenter’s ‘Halloween’ (1978) which made the genre extremely popular and led to a lot of follow-up’s in the eighties like the ‘Friday the 13th’ franchise.

The film looks great and has a lot more class and production value than you might expect from a B-movie. It has a documentary tone and dito voice over that is unfortunately somewhat nullified by some silly comic relief, mainly surrounding the driving abilities of a character called ‘sparkplug’ played by director Pierce.

The best known actor in the film is Ben Johnson who started out in the film business as a stuntman which later led him to become an actor in a number of John Ford films. He frequently acted in Peckinpah films (a.o. ‘The Wild Bunch’, 1969), starred in Steven Spielberg’s first studio picture ‘The Sugerland Express’ (1974), won an Oscar for best supporting actor for his role in Peter Bogdanovich’s ‘The Last Picture Show’ (1971) and played Melvin Purvis in John Milius’s ‘Dillinger’ (1973), another Arkoff production.

A bit of trivia: Director Charles B. Pierce wrote the initial story that was to become the fourth instalment in the Dirty Harry series called ‘Sudden Impact’ (1983) and is therefore believed to have written the famous phrase: “Go ahead, make my day”.